So, it seems the world has gone to Hell in a little yellow basket. If you have seen this movie than you understand why I attempted to make a funny there. But since I am going to be trapped in my house I have time to watch classic movies and write blog posts about them. Anyway, the movie I am going to be talking about is Two Girls and a Sailor. This movie came out in 1944 and stars June Allyson, Van Johnson, Gloria DeHaven, Tom Drake, Jimmy Durante, Lena Horne, and even Ava Gardner is in this movie! And this is the first post I am making in the year long blogathon I am doing with my friend Kate. So, let's just get on with this shall we. 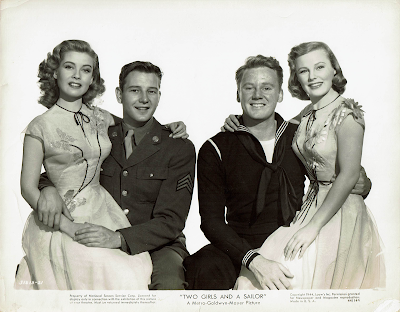 Gloria DeHaven, Tom Drake, Van Johnson, and June Allyson in a publicity photo for Two Girls and a Sailor (1944)

Jean and Patsy Deyo (DeHaven and Allyson) are two sisters who grew up in a vaudeville and when they get older they start their own act. The girls invite some service men over to their apartment for some refreshments and a nice performance of the song My Mother Told Me. While Jean is singing her little heart out and making heart eyes at Sergeant Frank Miller (Drake), Patsy is in the kitchen talking to a sailor named Johnny (Johnson). She tells him about how she and Jean want to do something to entertain the troops. Johnny tells her about an unused warehouse and suggests they turn it into a canteen.

A mysterious benefactor starts helping the sisters out. The following morning Patsy and Jean receive keys to the warehouse and told they are now it's owners. The girls decide to go exploring and they end up finding Billy Kipp (Durante). Billy had been squatting in the building for a long time after his wife left him and took their son with her. Thanks to their mysterious benefactor the place is all cleaned up and famous performers such as Lena Horne and Harry James perform at the new canteen, as well as the sisters.

Jean starts dating Johnny, even though her sister is in love with him too. But their relationship ends when Patsy discovers Johnny is their benefactor and that he is in love with her. Jean isn't too heartbroken though, she ends up with Frank and they are going to go live on his farm together. And Johnny and Patsy decide to start an act of their own. And Billy even gets a happy ending when he reunited with his son. 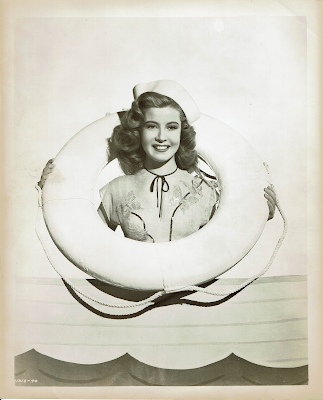 I adore this movie and if you are looking for a new comfort film to watch in these stressful times, I highly suggest this one. It is your typical 1940's Hollywood musical that has a happy ending and right now that's not so bad. I love the cast and it was nice to see Ava Gardner pop up in this film. Everyone in this film is amazingly talented and the songs are great as well. The best song in this film (in my opinion) is My Mother Told Me which Gloria DeHaven does an amazing job with and of course I love A-Tisket, A-Tasket as well. And like I said before if you haven't seen this film you should. Add it to your comfort films list that I know you are all keeping right now and stay safe out there.
at March 17, 2020