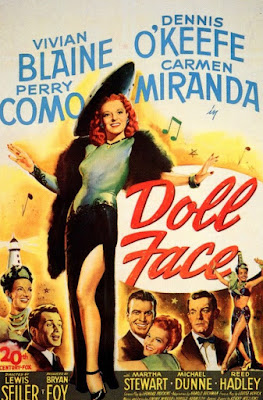 It's a new year and that means it is time to highlight a new star! In 2020, I will be focusing on Vivian Blaine. Yes, I have five more Deanna films to finish and they will be watched. But I also feel like Vivian needed some love and I am here to give it to her. This movie was released in 1945 and is based off of a play written by Gyspy Rose Lee called The Naked Genius. The film stars Vivian Blaine, Carmen Miranda, Dennis O'Keefe, Perry Como, and Michael Dunne. The film was called Come Back To Me in the United Kingdom. 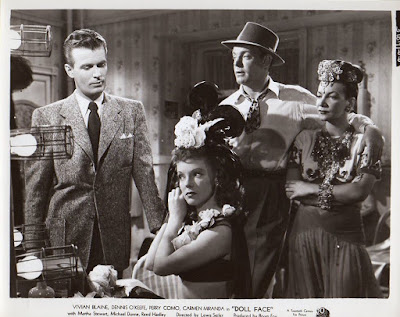 Mary Elizabeth "Doll Face" Carroll (Blaine) is looking for stage work and heads off to an audition. She thinks she has it in the bag, but one of the people running the audition recognizes her as a burlesque performer and she ends up not getting the job. Her manager and fiancee, Mike Hannegan (O'Keefe) tells her that she should write her autobiography. He thinks it will make her look better in the eyes of the public if she does this.

They hire a ghost writer named Frederick Manly Gerard (Dunne) after Mike sees one of his books at a book store. Frederick isn't on board until he sees Carroll. Another performer in the show Doll Face is in, Chita Chula (Miranda) tells Mike that is Doll Face leaves the show then it will probably close. Mike decides to fund his own Broadway show and Frederick offers up money to help with the show as well.

Mike releases parts of the autobiography early to generate press build-up, it works and Mike doesn't see the need to finish the book. However, Doll Face wants to finish her autobiography. She and Frederick head to Jamaica to add some final things to the book. The boat engine dies and they end up marooned on an island. Mike finds them the next day, but he thinks she has cheated on him and ends their relationship. Without Doll Face in his act, the act closes.

The book is released and it is called The Genius DeMilo. Mike sees that the book is dedicated to Frederick and he begins to realize he should have never left her. She ends up getting a job in a show and she refuses to speak to him. He sends a lawyer to stop the play she is in since she can't perform in any show that isn't produced by him, per a contract she signed. They talk things out and are reunited.

This movie was not the first one I was going to watch for my Vivian posts, but it just calling to me and I decided to watch it first. It was actually the first film I watched in 2020! I adore this movie! It's got the sweet and sad moments that we all enjoy and of course there are a tn of musical numbers as well that were enjoyable. My biggest surprise was Dennis O'Keefe. I didn't think I would like his character in this film since I didn't like his character in You'll Find Out. I thought he did a great job in this film and I was rooting for Mike the whole time. Vivian was amazing! I love her voice and I just think she is very talented. There isn't really anything bad I want to say about this film, I really liked it. The supporting characters were great and I loved the score. If you are curious about this film I reallt think you should check it out.
at January 28, 2020