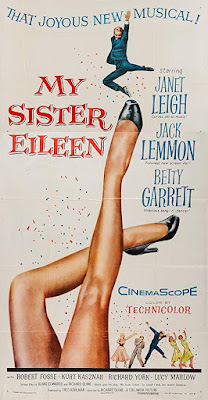 So, I would like to start off this post with a story. I bought a copy of this movie on DVD and plucked it off my shelf on Friday night, so I could watch it. Turns out the something was wrong with the DVD since I couldn't hear anything and I had to find another way to watch this film and I am glad I did! But more on that later, this 1955 musical stars Janet Leigh, Betty Garrett, Jack Lemmon, Bob Fosse, Tommy Rall, Kurt Kaszner, and Dick York. Michaela over at Love Letters to Old Hollywood was hosting a blogathon in honor of Janet Leigh's birthday, so I decided it would be a great time to talk about this film! 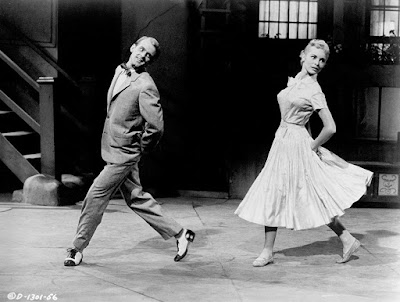 This film stars off with Eileen (Leigh) and her older sister, Ruth (Garrett) looking for a place to live in New York City. They end up finding a little studio apartment and agree to take it for the month since it is cheaper than all the other places they have looked at. They settle in and both girls are optimistic about their futures. Eileen will be going out on her first round of auditions the next morning and Ruth has a letter of introduction for a man named Robert Baker (Lemmon) at Mad Hatter Magazine. Both girls are nervous about everything the next morning, but from a little encouragement from their new neighbor Ted Loomis (York) and their Landlord (Kaszner) they are ready to take on anything.

Eileen heads to a local Walgreens to have lunch. Frank Lippencott (Fosse) works there as the soda fountain manager and offers to help Eileen out anyway he can. Meanwhile, Ruth catches Robert Baker as he is about to leave for vacation. He tells her that she should write about what she knows than the fake stories she has sent him. After a couple of weeks, Eileen has failed to land an acting job and Ruth is getting nowhere on the writing front. Chick Clark (Rall) hears Frank telling Eileen about an audition. So, to get in Eileen's good graces he tells her that he knows the producer of the show and he can help her get an audition. Turns out the audition was at a burlesque house and the Eileen would have had to strip. She is furious and doesn't audition.

Ruth meets Robert Baker again and her tells her that his favorite stories of hers are the ones about Eileen. Ruth claims that she and Eileen are one in the same. He ends up asking her to go on a date with him, but she declines since she has other plans that night. Chick and Frank are coming over for dinner at the girls' apartment. Plans change however when the plumber comes and gets plaster in the spaghetti. Chick offers to buy them all dinner and they end up going to El Morocco. Ruth runs into Robert there and Ruth says she isn't feeling well, so Robert won't end up meeting Eileen.

Ted's fiancee asks the girls if they can put him up for a few nights since her mother will be in town and doesn't know she and Ted are living together. The girls agree and Ted ends up sleeping in their kitchen. Robert asks Ruth to have dinner at his place and she agrees. The night ends with him trying to kiss her and she ends up running out. Eileen tells Frank that she and Ruth will have to go back to Ohio, unless she or Ruth can secure a job. Frank is in love with her and is willing to help until he discovers Ted is staying with the girls and accuses them of being Bohemians before he goes.

The next day, Ruth gets a call about a job and eagerly makes her way to Brooklyn. Turns out the call came from Chick who just wanted to get Eileen alone. Ted comes to Eileen's rescue and comforts her after the ordeal. However, his fiancee sees them together and thinks he is cheating on her. He runs after her to try and tell her what really happened. Ruth ends up being followed home by a bunch of Brazilian naval cadets. They misunderstood why she was there and she can't tell them why she was since they don't speak English. A conga line starts and a wild party breaks out. Everyone is arrested and the Brazilian government steps in to free all of them. Once they are out of jail, the girls go home to pack so they can go back to Ohio. But Robert shows up and tells Ruth he loves her and that he is going to publish her stories. Frank and Eileen get back together when he comes over with a box of chocolates. Everyone is happy and the sisters decided to stay in New York. 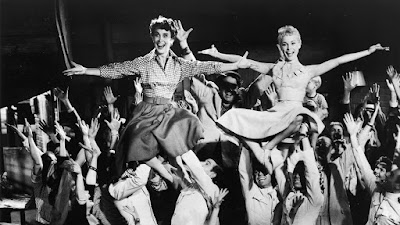 Betty Garrett and Janet Leigh in My Sister Eileen (1955)

I found this film to be very delightful! I loved every character in it. I mean Chick was a bit of a jerk, but I love Tommy Rall. The dynamic between Ruth and Eileen was sweet. They had such a loving relationship and Eileen never got mad about Ruth's lie. The musical numbers were amazing! And I am mad that I am now finding out Jack Lemmon could sing. Don't tell me if he was dubbed, I don't think I could handle it. I had a feeling I would enjoy this movie and I was right! You guys should check out this film, but I suggest you don't buy it on DVD. You might run into some of the issues I had. 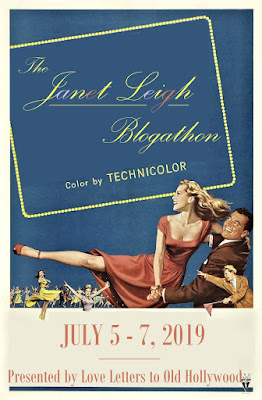 This post was written for The Janet Leigh Blogathon. To view the other posts go here.
at July 07, 2019