Catching Up With Deanna Durbin: Three Smart Girls Grow Up (1939) 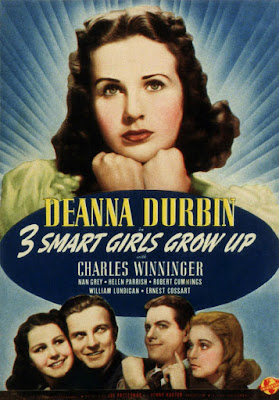 Happy 4th of July everyone! I know I have been gone for awhile, but now I am back! And I have decided to celebrate America's birthday by talking about a movie starring a Canadian actress. The movie I will be talking about today is Three Smart Girls Grow Up. This movie is the second movie in the Three Smart Girls series. This movie stars Deanna Durbin, Nan Grey, Helen Parrish, Robert Cummings, William Lundigan, Charles Winninger, and Nella Walker. Helen Parrish takes over the role of middle sister Kay in this film. Barbara Read played Kay in the first movie, but didn't return for the second film. This film came out in 1939, two years after the first one and four years before the third and final movie in the series came out. 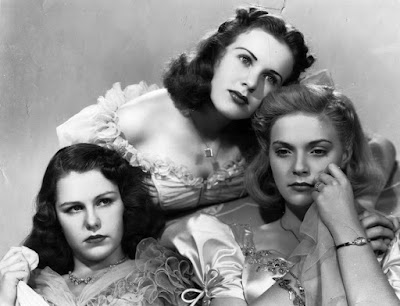 The Craig sisters are getting ready for a party that is being held at their home. It's the first grown up party that youngest sister, Penny (Durbin) will be able to attend. Joan (Grey) and Kay (Parrish) are helping her get ready and telling her how she should behave. The girls head downstairs and are greeted by Richard Watkins (Lundigan) who jokes with the girls that he thought they would never make it to the party. He then asks if he can speak to Joan alone and they head outside to talk. Penny gets up in front of everyone and sings and after she is finished Joan comes in and tells her that she is engaged. Penny goes around telling everybody about it, but Kay seems unhappy about the whole thing.

Penny and Joan notice Kay is unhappy later that night. She lies and tells them that she is sad that Joan will be leaving home. The truth is though is that she loves Richard. Penny discovers this later that night when she hears Kay crying and sees her throwing letters from Richard into the fire. This is when Penny decides she will play matchmaker for Kay. The next day during her singing lesson she finds the guy she thinks will be perfect for Kay. His name is Harry Loren (Cummings) and he is a musician. She invites him over for dinner that night and he accepts. The girls and their mother (Walker) are there to greet Harry that night. Mr. Craig (Winninger) is busy at the office and won't be home until later. Right before dinner, Harry is playing the piano and flirts a little with Joan. Penny gets upset and is really rude to Harry, which causes him to leave. Her mother sends her up to her room as a punishment and is convinced, like her other daughters that Penny's behavior was caused by her being jealous of Joan because she is in love with Harry.

Mr. Craig comes home and finds out what has happened. His wife convinces her husband to tell Penny she is a horrible singer and that she shouldn't have anymore singing lessons.Of course Penny is upset and goes back to the music school the next day and tells Harry that Joan is in love with him. And at that moment Joan shows up to collect Penny from the school and on the way home Joan admits that she is in love with Harry. Richard decides to take the sisters out that night to cheer them up and Penny suggests the club that Harry works at. And while Harry and Joan are dancing together, Penny tells Richard that Kay is in love with him. This causes Kay to slap her and Penny swears she will never talk to her sister ever again. As they are setting up for the wedding, Penny tries to tell her mother that Joan doesn't love Richard, but her mother won't hear it. Penny ends up going to her father and he agrees to help her out. On the day of the wedding, Mr. Craig takes Joan to Harry and ends up walking Kay down the aisle to marry Richard as a tearful but happy Penny looks on. 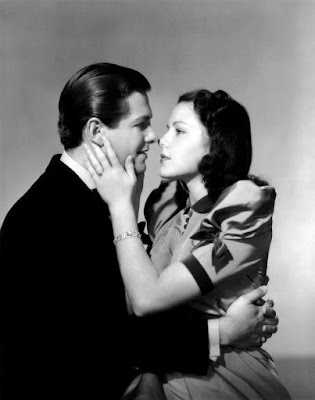 I didn't enjoy this film as much as I thought I would. I am sad I found it disappointing and that mainly falls onto the shoulders of Penny. She was obnoxious in this film. I know it's because she is a teenager, but she needed to let Kay and Joan figure things out for themselves. She was lucky her father agreed to help her out in the end because things were looking pretty grim there for awhile. I liked all the other characters and I enjoyed the song Penny sang while Harry played the flute and of course I do love watching Robert Cummings. But this movie just wasn't for me. But I suggest you see it, especially if you want to watch the whole Three Smart Girls series.