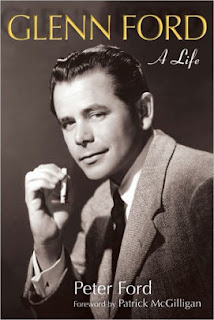 It's kind of crazy how all the stars align at certain points in your life. I would say for me this is one of those times. Glenn Ford is the Star of the Month for July on TCM and they are showing a bunch of his movies on the channel tonight. I finished this book today and I wanted to get on here and talk about it as soon as I could. Raquel Stecher over at Out of the Past has got the 2019 Summer Reading Challenge going on and this is my first review for it.

I am not going to lie, I haven't seen a lot of Glenn Ford films. I have seen Gilda and The Loves of Carmen. I have actually seen more films featuring his first wife, Eleanor Powell than I have him. But I figured it was a good time to learn about this legendary actor and from none other than his only child, Peter Ford. Peter was Glenn Ford and Eleanor Powell's only child. I have been pretty vocal about books written by family members or lovers. I am not a fan of those kind of biographies, but I think Peter did a good job with this book. Peter and Glenn had actually begun this project together and they were working on it when Glenn died in 2006. 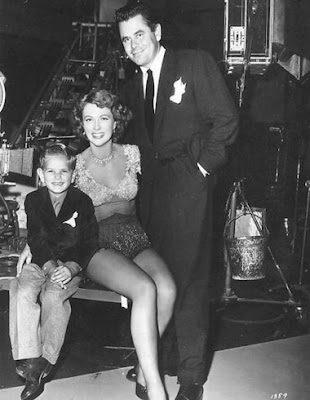 Peter Ford with his parents on the set of a film.

My main issue going in was that Peter would sugarcoat his relationship with his father. He didn't and I am happy he talked about the good and the bad times. Peter didn't really have a great relationship with his father until he was in his late teens. By this time Glenn and his mother had divorced and Glenn no longer viewed his son as competition. It seemed Glenn thought Peter was taking away all of Eleanor's love. And there were times Peter actually wondered if Glenn loved him. According to Peter, Glenn never said that he loved him. But for a period of time in the 60's and early 70's, Peter was Glenn's companion in everything he did. They traveled together and Peter was even in some of Glenn's movies and he even worked on dialogue coach for some of them too.

Peter talks at length about his parents' marriage. I knew they were married, but I didn't realize for how long. Glenn and Eleanor were married for sixteen years. I thought it was six or seven, but I think I got my dates mixed up. After their divorce, Glenn and Eleanor weren't on good terms. But when Eleanor found out she was dying from cancer, she didn't want Glenn to know. Peter ended up telling his father, even though they weren't talking at the time, and Glenn got a hold of Eleanor. Peter doesn't go into what their conversation was about. I honestly don't think he knew himself. But it seems Glenn Ford got closure with his first wife before she passed away a couple months later.

At the time of Eleanor's death, Glenn was not doing well. At this time he was drinking heavily and mourning the loss of not only Eleanor, but his mother and William Holden as well. He had been very close with his mother and he considered Bill to be his best friend. Holden actually had a script for them and they were going to be in a movie together, but Bill's death put all those plans to rest. Also at the time his third marriage was falling to pieces. Peter says that wife number three caused a huge rift between father and son, but was willing to mend fences when she fell out of love with Glenn and married someone else.

Things only got worse for Glenn after his third wife left him. His nurse kept Peter from seeing his father and stole money from the ailing star. Many of Glenn's valuables were stolen and Peter says to this day he still sees stuff pop up on eBay or at auction houses. After Peter and his wife got rid of that nurse, Glenn fell in love with his new nurse and they got married. The marriage only lasted for 49 days. Wife number four had been told by a psychic that Glenn would die soon and leave her a rich widow. That's not what happened and Peter and his family ended up moving into Glenn's house so they could take care of him. His health was so bad at this point that he needed help walking. He actually wanted to write his own biography, but died while he and Peter were working on it.

As for why I was interested in this book. I had read an article somewhere saying that Rita Hayworth and Glenn Ford had a forty year affair. I was honestly curious about how they got away with that and had never heard about it before. They were lovers for a period of time, but the mainly remained friends. Eleanor Powell didn't like Rita. Peter says at one time that she called her a hussy. Glenn and Rita lived next door to each other for a number of years. She ended up selling her house when she got ill and her daughter took over the care of her. Glenn would remain in contact to with her daughter, but didn't go see Rita in her final years. He didn't want to see her in those final days and he was a pall bearer at her funeral. Peter also mentions he had a one night stand with Marilyn Monroe and a short relationship with Judy Garland. He also thought Hope Lange was the love of his life until she married another man. 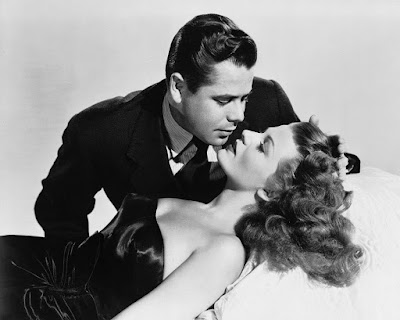 Glenn Ford was a great actor but as a man away from the camera he didn't have it easy. It is sad he was jealous of his own son, but that might be a product of his own upbringing. The Foreword of this book made it sound like Peter was going to ruin his father in the eyes of his fans. But Peter doesn't do that, he shows us the good and the bad of his father. He shows us that Glenn Ford was human and made mistakes.  Plus, the author of the foreword mentioned Christina Crawford's book and I can't take him seriously at that point. I was happy and sad to learn about Glenn Ford. He had such an amazing Hollywood career and in the end he was a heartbroken elderly man who told his son from time to time that he just wanted to die.

He went through a lot in the last twenty five years of his life. But he left this world on his own terms and was able to be with his family and friends again. I plan to look into Glenn's filmography more this month since TCM is highlighting him. There was more to him than Rita's sometime co-star and Eleanor Powell's husband. And I would like to see more of him this month and if you are interested in Glenn's life, you should check out this book. There are bits and pieces about Peter's life thrown in there too, but it never overshadows the true subject of the book.