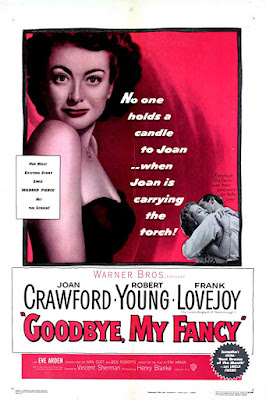 I love Joan Crawford! And I am glad my friends over at Pale Writer and Poppity Talks Classic Film decided to do a blogathon in her honor. It has been 42 years since Joan has passed away and I am glad we all get this chance to honor her. The movie I will be talking about today is called Goodbye, My Fancy. The movie came out in 1951 and stars Joan, Robert Young, Frank Lovejoy, Eve Arden, Janice Rule, and Virginia Gibson.

Joan stars in the movie as Agatha Reed. Agatha is a U.S. Representative and she receives a letter fro her old college, inviting her back so she can receive an honorary degree. Unknown to the board at the college, Agatha was kicked out of school after she gone out on an all night date with a young professor named, Dr. James Merrill (Young). James is not the president of the her old alma mater and his daughter Virginia (Rule) and her friend Mary Nell (Gibson) are about to graduate.  A Life photographer named Matt Cole (Lovejoy), follows Agatha and her secretary, Miss Woods (Arden) to the college to do a story on her and to make her see that she truly loves him and not James.

Agatha comes to the college and ends up staying in her old room. She gets along with Virginia and all her other friends. But soon she has to come to the aid of a professor the girls love but the board hates. James won't stand up to the board, which frustrates Agatha and his daughter. Agatha still loves him and they have a romantic night together. But the next morning they are suppose to show a film, celebrating Agatha's legacy but the board decides against it at the last minute. Eventually, the film is shown and it has a huge impact on the girls. Agatha tells James he needs to stop lying to his daughter and that he needs to stand up to the board. She realizes Matt is the man she is meant to be with and that James was just a fantasy from her college years. 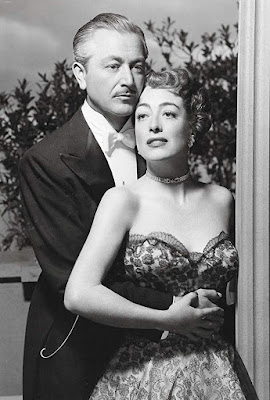 Robert Young and Joan Crawford in a publicity photo for Goodbye, My Fancy (1951)

I have to say I really enjoyed this film. I saw the last twenty minutes of it one morning before work and was a little thrown by the ending until I saw the whole film. Joan was amazing in this film! She worked well with the rest of the cast and the material she was given. I hate to say it, but the weak link was Robert Young. He and Joan had no chemistry and it seemed like he was bored the whole time he was on screen. Frank Lovejoy was great in this film too! He and Joan had amazing chemistry, but he seemed to have amazing chemistry with every female a came across on screen, especially Virginia Gibson. Eve Arden was funny as usual and I liked Janice Rule in this movie too.

If you are looking for a good, dramatic Joan movie to watch I would recommend it. At first, I was upset that Joan and Robert didn't end up together. But after seeing the whole film, I am happy Agatha and Matt ended up together. My main disappointment was the leading man, but otherwise I liked this film and I think you will too. 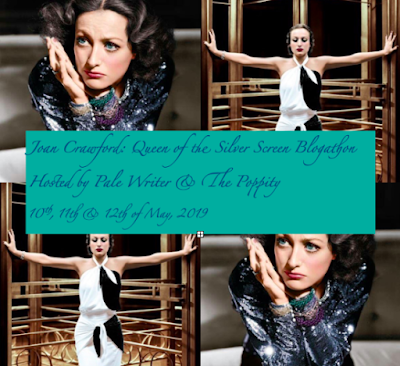 This was written for the Joan Crawford: Queen of the Silver Screen Blogathon. You can find the other posts here and here.
at May 12, 2019