Catching Up With Deanna Durbin: His Butler's Sister (1943) 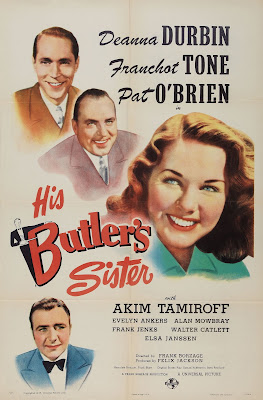 Spring has finally sprung and Michigan and that has made me want to talk about Deanna Durbin. The film I will be talking about today is His Butler's Sister from 1943. This will be the sixth film I will be talking about in the Catching Up With Deanna Durbin series. Her co-stars in this film were Franchot Tone, Pat O'Brien, Akim Tamiroff, and Elsa Janssen. This was the second film she made with Tone and the only film she would make with O'Brien. She and Tamiroff would work together again in Can't Help Singing. This film was nominated for an Academy Award for Best Sound Recording.

It just hit me today that once I finish Deanna's filmogaphy, I will have nothing new of hers to watch in the future. And honestly I am a little sad over it. I could have finished all of her movies years ago, but I think deep down I never wanted to because that would be it. I know it sounds a little strange, but I wish there was more. I know there can't be and I am going to enjoy what I have of her including this film and the twenty other ones she made, along with the stills and clippings I now have that feature her. Anyway, enough of my whining, it's time to talk about the movie. 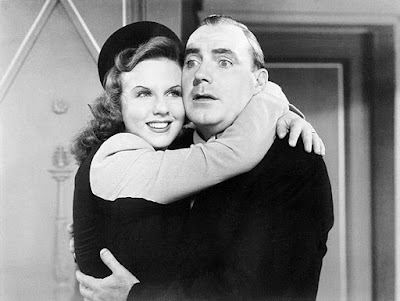 The movie starts out on a train. Ann Carter (Durbin) is on her way to see her older half-brother when she hears composer Charles Gerard (Tone) is on the same train. She goes to sing for him, but it turns it the man is a girdle salesman. However, Gerard hears her singing when he gets off the train and he tries to see who she is but the train pulls away before he can. Meanwhile, in Gerard's New York City penthouse, his butler Martin Murphy (O'Brien) is drinking his boss' whiskey and smoking his cigars when Ann shows up. He does recognize her at first, but once she rubs her nose against his he realizes it is his baby sister. She thinks he owns the place but he ends up telling her that he doesn't and she perks up once she hears Charles Gerard owns it. They get into a squabble, unaware Severina (Janssen), the cook has overheard them.

The next morning Ann and Severina become friends after Ann tells Severina that she is Martin's sister. They become fast friends and eat fish together. Charles comes home to find Ann vacuuming under his piano and mistakes her for the new maid. Wanting to stay, she tells him that she is in fact the new maid. Martin is not happy with this development and goes out of his way to stop treating her like his kid sister and more like a maid. Of course this upsets Ann, but she ends up making friends with the butlers of the other residents in the building. Well, she is friendly and they are all in love with her.

The following night, Charles hosts a party at his place and his girlfriend is one of the guests. She informs him that she is going to Maine and would like him to go with her. He agrees and tells Martin to let Ann go since he won't need a maid while he is in Maine. Martin does this and Ann in one final attempt sings for him while he is in the bathroom, but he thinks it is a performance on the radio. Ann goes to the office of one of Charles' friends in the hope of auditioning for him. Charles comes in to tell his friend the play is off and Ann tells him he is making a mistake. That night Ann and her brother head out to celebrate one of the other butler's birthdays. Charles shows up and Ann ends u leaving with him. They kiss in the elevator and Ann knows she is in love with him.

Martin isn't happy about this and tells Charles Ann was just using him. Both of their hearts get broken in the process and Martin loses his job. Martin says he will be her manager but Ann doesn't want to sing anymore. He convinces her to sing one last time at the Butler's Ball. That night Ann does sing and Charles shows up. They reunite and and embrace one another. 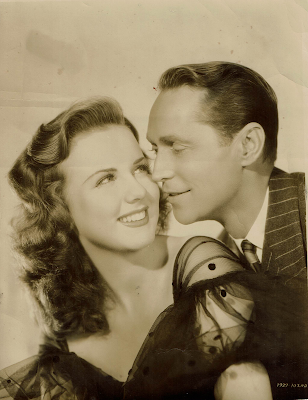 I might have jumped the gun when I said Durbin and Tone had no chemistry on screen. I was wrong and I apologize, it was clearly in the movie Because of Him that they have no chemistry. Anyway, I liked this movie. Deanna and Franchot had more time to develop the romance and I enjoyed the build up. Pat O'Brien;s character was kind of a jerk in the beginning but he gets his act together in the end and is there for his baby sister. I liked the other butlers and how they fawned over her as well. The plot is typical for a Durbin film with some notable exceptions. But I will recommend this film more than the other one where Tone was her leading man.
at May 15, 2019