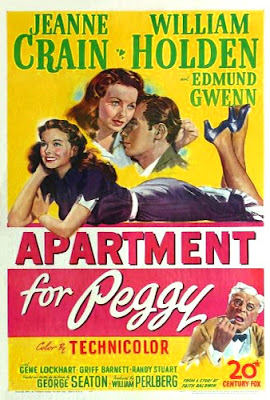 William Holden would have turned 101 this year and the celebrate that a few of my favorite bloggers gave put together this blogathon in his honor! The movie I will be talking about today is a films from 1948 called Apartment for Peggy. The film stars Holden, Jeanne Crain, and Edmund Gwenn. This movie is based off a novelette called An Apartment for Jenny by Faith Baldwin. And if you are interested, I will be doing a blogathon in honor of Jeanne Crain, who plays Holden's wife in this film. All the information you need for that, will be here. 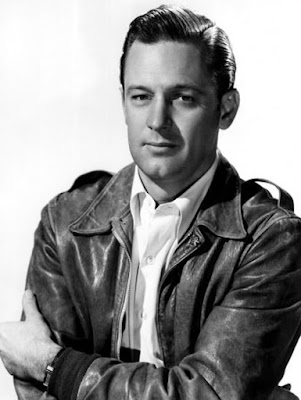 William Holden in a publicity still for Apartment for Peggy (1948)

Holden stars as in this film as Jason Taylor. He is a veteran of the second World War and he is attending college in hopes of becoming a teacher. He and his wife Peggy (Crain), live in a small camper and she spends her days trying to find a new place for them to live. One day she meets an older professor named Henry Barnes (Gwenn). Henry, is retired and had told his friends a few days before he had planned on killing himself on March 1st, saying he no longer felt useful. He finds her delightful and soon enough Jason and Peggy are living in his attic.

At first, things are a little chaotic, but in time they become a family. Peggy even begins to call Henry "Pops." At Peggy's urging he also begins to teach the wives of veterans, so they don't feel inferior to their husbands. However, Henry still plans on taking his own life with sleeping pills he getting from his doctor. Things take a turn for the worse when Jason considers leaving school to go sell cars because he is worried about money. And Peggy suffers a miscarriage, which leaves them all heartbroken. Henry tells Peggy he had planned on committing suicide but he changed his mind.

Jason quits school and moves to Chicago to sell cars. Peggy stays with Henry and is depressed. Henry contacts Jason and tries to get him to go back to school. Henry thinks he has failed, but Jason is actually still in school and has passed all his exams except chemistry. But with a little help from his professor he passes his exam. Henry, after telling Peggy that his house is her house, tries to kill himself.

However, the pills weren't sleeping pills. The pills weren't even lethal at all. Jason returns and Peggy tells him what Henry tried to do. Jason talks to Henry and the older man realizes a lot of young men would love the chance to live their lives, but aren't able to because they died during the war. In the end, everyone gets their happy ending. 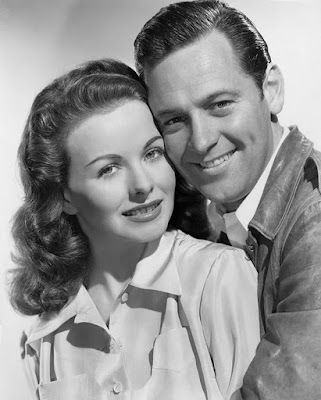 Jeanne Crain and William Holden in a publicity still for Apartment for Peggy. (1948)

My first thought about this film was I thought it would be a cute, romantic comedy. I was wrong, but it was still an enjoyable film. It is a lot darker than I thought it would be, but it handles the subject of suicide better than some of the movies involving that subject I have seen recently. Holden is kind of a secondary character in this movie, but he has amazing character growth. And I enjoyed his scenes with Jeanne Crain and Edmund Gwenn. They were all entertaining and they had a sweet, little family unit. And they were able to get through all the hardships together, which I feel is the message people should take away from this film. No matter if it is your actual family or a family you form all on your own, you can get through anything life throws at you with their help. I think it is a movie you should see and you can watch it for free on YouTube. 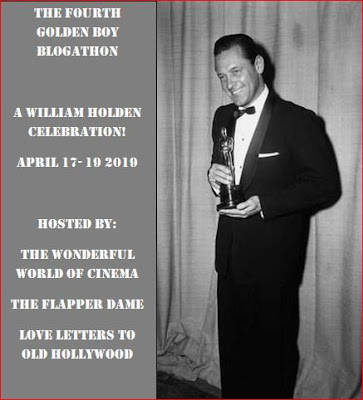 This post was written in for The Fourth Golden Boy Blogathon. You can find the other posts featured in this blogathon here, here, and here.
at April 19, 2019