The Jean Harlow Blogathon: The Girl From Missouri (1934) 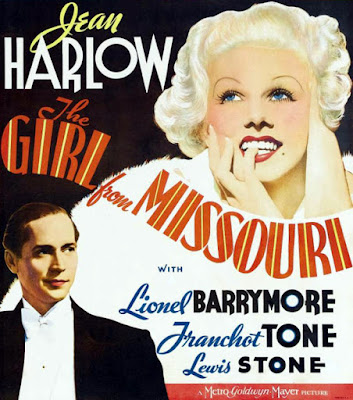 Happy Birthday Jean Harlow! Jean would have been turning 108 years old today if she was still with us. Sadly, she isn't but we will be celebrating her life and career today anyway. Now I will admit, I haven't seen many Jean Harlow films. But from what I have seen I love her work. I have actually already seen this film. I watched it one night on FilmStruck a few weeks before it shut down. I felt bad I hadn't really given any of her movies a try since there were a few f them on there at that time. And I want to thanks Musings of a Classic Film Addict and The Wonderful World of Cinema for hosting this blogathon and showing my fellow Pisces lady some love!

The film I will be talking about today is The Girl From Missouri. It came out in 1934 and stars the birthday girl, Franchot Tone, Lionel Barrymore, Lewis Stone, Patsy Kelly, and Hale Hamilton. 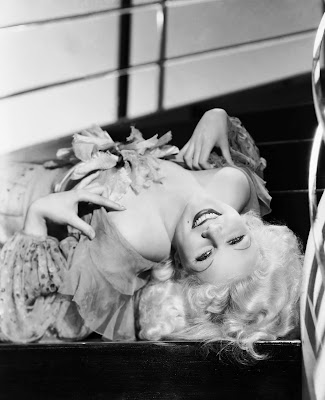 The movie starts out with Eadie (Harlow) leaving her home in Missouri. She boards a train with her best friend Kitty (Kelly) and tells her that she plans to get married and do something worthwhile with her life. She ends up becoming a chorus girl and one night at a party she meets Frank Cousins. Frank tries to lavish her with gifts, but she won't accept them until they are engaged. To her surprise, he accepts and gives her his cuff links. After she leaves the room, Cousins commits suicide. He was in financial ruin and one of the party's guests, T.R. Paige (Barrymore) wouldn't save him. T.R. saves Eadie from having to deal with embarrassing questions from the police when he takes the cuff links off her person.

The next day Eadie goes to thank Mr. Paige for his kindness. She tells T.R. about her plans to get married and do something worthwhile with her life. An alarmed Mr. Paige gives her money and leaves for Florida. Eadie and Kitty follow him to Florida and while waiting for him in his office there, Eadie meets T.R.'s son Tom (Tone). He is taken with her and she has no idea who he is, so she tries to give him the brush off. After she finds out who he is, she still tries to give him the brush off since she can tell he has no interest in marrying her.

After a failed attempt of seducing her while they were alone in his bedroom, Tom tells his father he plans on marrying Eadie. T.R. tells Tom he approves of the match, but after he leaves he calls the district attorney. Tom rushes over to tell Eadie they will be married, but after he goes she is caught in the arms by another man and is accused of stealing Cousins' cuff links. The district attorney has her thrown in jail and Tom breaks off the engagement.

A man named Charlie Turner (Hamilton) bails her out of jail. She ends up sneaking into the stateroom that T.R. and Tom are staying in. She comes out of the room, only wearing lingerie, and bumps into T.R. just as he is having his picture taken. Eadie ends up getting drunk and turning to Charlie for comfort, but Kitty tries to keep them apart. Tom comes back into the picture after he had changed his mind about marrying Eadie. He puts her in the shower to sober her up. T.R. tells Eadie he actually approves of the match this time and a wedding is planned. 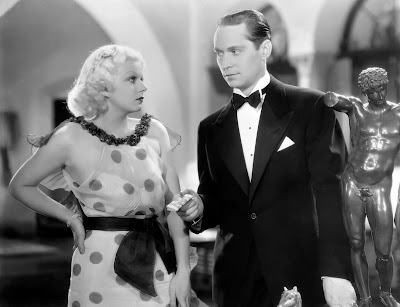 Jean Harlow and Franchot Tone in The Girl From Missouri (1934)

Like I have mentioned before, I really enjoyed this movie. I liked Harlow's acting in this film and I really liked her character, Eadie. Her chemistry with Tone was good and I am glad they had a happy ending. This is the second Jean Harlow film I have ever seen. And I honestly can't tell you why I haven't seen more of her films. She was funny and I really enjoyed her acting. I plan on watching more of her films as the year goes on and I am happy I got to be apart of this event! 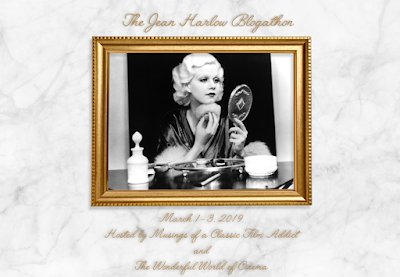 This post was written for The Jean Harlow Blogathon. If you want to see the other posts please go here or here to check them out.