Catching Up with Deanna Durbin: The Amazing Mrs. Holliday (1943) 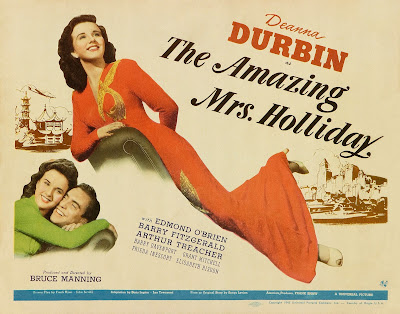 It's time for another installment of my ongoing series Catching Up with Deanna Durbin. This time we will be talking about the 1943 film The Amazing Mrs. Holliday. This film is not the usual "Little Miss Fix-It" film, this movie is a bit more serious. This movie co-stars Edmond O'Brien, Harry Davenport, Barry Fitzgerald, and Arthur Treacher. When this movie came out the Second World War was still going on and this movie shines light and some of war's worse elements like death and the orphaning of children. Deanna still sings in this film, but the tone isn't as lighthearted as it usually is. 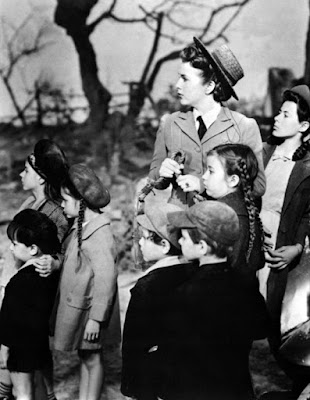 Deanna Durbin and the children in The Amazing Mrs. Holliday (1943)


A young school teacher named Ruth Kirke (Durbin) is trying to get a group of orphans to Calcutta when the ship they are on is sunk by a torpedo. They are the only survivors of the attack along with a sailor named Timothy (Fitzgerald). They are picked up by a ship and taken to California. Ruth is informed once they arrive that that the children will be held until five hundred dollars bond is posted for each child. They don't have the money, so they head to the house of the commodore of the ship (Davenport). He perished when the ship was bombed, but he had promised Ruth he would take care of the children.

They head to his mansion in San Francisco and tell his family members of their struggles. The commodore's family refuses to help until Timothy tells the family that the late commodore and Ruth were married. Ruth plays along only because she wants to be reunited with the children. Timothy, Ruth, and the eight children move into Holliday's mansion. They soon meet the commodore's grandson whose name is Thomas (O'Brien). He is suspicious and asks Ruth about how he became her grandmother. She tells him the story of how she found a dying Chinese woman and her baby. The young woman asked Ruth to take care of the baby since she no longer couldn't, of course Ruth agreed to this. He is moved by the story and by Ruth singing to the children before they go to bed, so much so that he begins to fall in love with her. 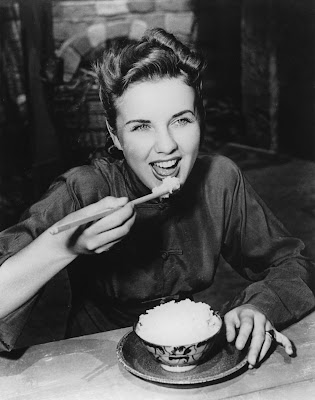 Deanna Durbin eating rice on the set of The Amazing Mrs. Holliday (1943)

After she learns that she will have to face the press and the family as the commodore's widow, Ruth tries to leave with the children and Timothy in the middle of the night. Thomas catches them and sends them all back to bed. Ruth ends up confessing everything to Thomas and he is upset with her. He tells her the children can stay but that she must go once the children's permits come. She is heartbroken but she understands. She watches him get closer to the kids and she starts to fall in love with him.

Ruth notices one day that the children's permits come and she asks Timothy to buy her a train ticket to Philadelphia. He does it, but he isn't happy about it. She goes to the station and Timothy ends up bringing Thomas down. He tells the him that the guy sitting next to her is the man she is going to marry. He is trying to make Thomas jealous and it works. After a few minutes of confusion, Thomas and Ruth leave together.

There is a China Relief Ball held a few days later. Thomas and Ruth are seen kissing before she gets on stage to sing. Thomas looks up at her with love in his eyes, unaware his grandfather is alive and watching in the crowd. The commodore makes his presence known and tells Ruth he will marry her for real. After he is informed that Ruth and his grandson are in love. He tells everyone that they were never married, but Ruth will become Mrs. Holliday when she marries Thomas in three days time. 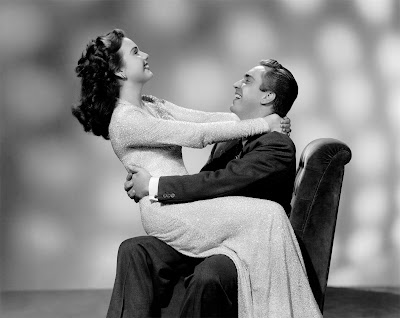 Deanna Durbin and Edmond O'Brien in a publicity still for The Amazing Mrs. Holliday (1943)

I actually really enjoyed this movie. I liked that it was more of a serious film than a happy go lucky movie. Don't get me wrong, I like those kinds of films, but sometimes you need to be reminded there is a war going on. I liked the chemistry between Durbin and O'Brien. He has made his way into my top three leading men of Deanna's along with John Dall and Robert Paige. I also loved how motherly Deanna was in this film. She was so sweet with those kids and she seemed genuinely happy to be taking care of them. My biggest issue with the film was they credited the Chinese baby as "The Chinese Baby." Didn't the kid have a name? But out of the four films I have watched and reviewed I have enjoyed this one the most. Deanna is in fine form in this film and this movie shows she could have handled more dramatic parts.