Catching Up With Deanna Durbin: Up In Central Park (1948) 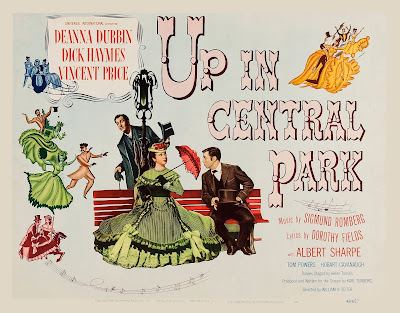 Today, I have the day off since my boss doesn't like it when there is a thick sheet of ice on the road. So, that gives me time to write about Up In Central Park. This is the second movie I will be writing about in my "Catching Up With Deanna Durbin" series. This lovely little musical stars Deanna Durbin, Dick Haymes,Vincent Price, and Albert Sharpe. Up in Central Park was the last film that Durbin ever made. However, it was released before For the Love of Mary. Deanna would leave Hollywood after making this film and move to Paris with her third husband, Charles David. He had been her director on the film Lady on a Train.

The movie takes place in New York City, in the 1870's. A corrupt political boss named William Tweed (Price) is working hard to get candidates he wants in office re-elected. One of the people opposing this practice is a young reporter named John Matthews (Haymes), who works for the New York Times. Timothy Moore (Sharpe) and his daughter Rosie (Durbin) come to New York in hopes of finding a better life. Once they are off the boat they are approached by one of Tweed's men. He offers Moore money to vote in the election that is taking place. But he will only get the money if he votes for a certain candidate. He agrees to do it since he and Rosie will need the money. He votes twenty-three times in the election and gets fifty dollars for his hard work and an invitation to a party at William Tweed's house. 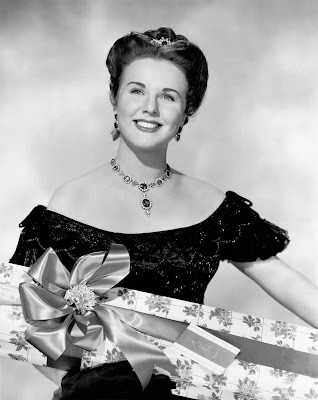 Deanna Durbin in a publicity photo for Up In Central Park (1948).

Timothy and Rosie attend the party that night and she overhears Tweed's plan to embezzle money through renovations on Central Park. Tweed appoints her father to superintendent of the park, hoping Rosie won't say anything about what she has heard. However, Timothy gets fired after he gives some information to John. Rosie goes to Tweed to get him his job back and is unhappy with John, even though he is quite smitten with her. He even tries to make it up to her by offering a job to her dad and telling her that Tweed is not a good guy. Rosie learns this on her own when Tweed tries to make numerous advances towards her until her father shows up, thinking he was also invited over to dinner at Tweed's house.

However, it doesn't stop her from setting up a meeting between Tweed and Matthews. The meeting doesn't go well, especially after Tweed offers Matthews money to leave the New York Times. Of course John refuses and he leaves. John finds out that Timothy is attending a grammar school, so he can learn to read. And with the help of Timothy's teacher, John convinces him that Tweed is not a good man. He tries to tell Rosie, but she won't listen to her father since Tweed can get her in at the opera house. Rosie auditions at the opera house and is put in the upcoming show. Meanwhile, her father and John are given the proof the need about Tweed's corruption from the drunk mayor. After he is exposed, Tweed prepares to leave the country and offers no apology to Rosie. After he goes, Rosie ends up in Central Park and is reunited with her father and John. 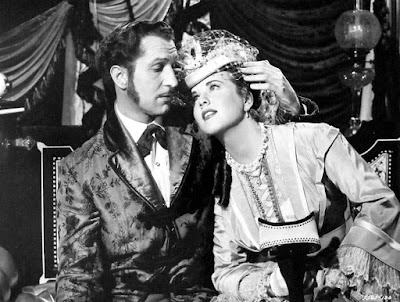 Vincent Price and Deanna Durbin in a scene from Up in Central Park (1948).

Deanna Durbin was not a fan of her final four films, which included this movie, but I have to say I liked this movie. I have been putting off seeing this movie because I am not a fan of Dick Haymes (Not only because he was a huge asshole but because I think he sucks as an actor) but that kept me from actually watching this Deanna Durbin movie. Of course I find Haymes as wooden in this movie as I did in State Fair. But I will admit he had a great singing voice. Vincent Price was amazing in this movie and so was Albert Sharpe. Of course at times I wanted to shake Rosie and make her see that she was being used. But she saw it in the end and got her happily ever after. Durbin and Haymes chemistry seemed forced, but she had great chemistry with Price. And the two became friends and would go out to dinner. I am glad I got over myself and tuned out Dick Haymes because I really enjoyed this film.