Catching Up with Deanna Durbin: Mad About Music (1938) 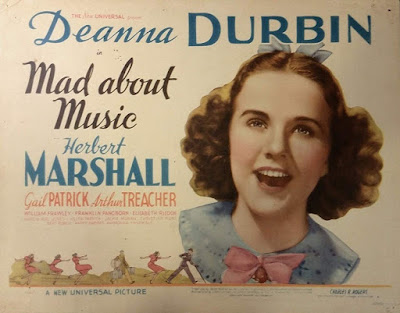 Can you guys believe I am on my third installment of this series? I can't believe it either! But I am bound and determined to finish Deanna' filmography this year. There are more installments to come, but I got to say I am doing pretty good with this series. I am trying to get this finished and hoping I don't lose power. It is very windy outside right now.

The movie I will be talking about today is called Mad About Music. It was released in 1938 and stars Deanna, Herbert Marshall, Helen Parrish, and Gail Patrick. When I bought this movie, I wasn't sure if I had seen it or not. I can say for sure that I hadn't seen it before today and I can also say I really liked it. More on that later though. 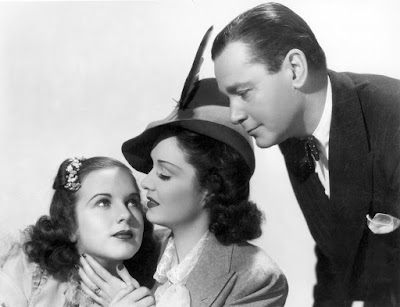 Deanna Durbin, Gail Patrick, and Herbert Marshall in a publicity still for Mad About Music (1938)

This movie follows a fourteen year old girl named Gloria Harkinson (Durbin). She is attending an all girls boarding school in Switzerland. Her mother is a famous movie star named, Gwen Taylor (Patrick) and Gloria is not allowed to talk about her mother at school. Gwen's manager also forbids Gwen to talk about her daughter, thinking it will ruin her image if the public knew she had a child. So, Gloris talks about her father, even though she never knew him since he died not long after her birth. She reads the letters that her father send her (Gloria is really the one writing them.) to the girls at school. However, one of her classmates Felice (Parrish) doesn't like Gloria and thinks she is lying.

So, it gets to the point where Gloria goes to the train station to hide out. She had just lied to her classmates and her teacher about her father coming. However, the other girls show up wanting to see her dad and Gloria chooses an English man named Richard Todd (Marshall) to play the role of her father. Richard isn't aware of this until much later, he just thinks she is welcoming him to Switzerland. After he gets a few visitors, he ends up confronting Gloria and she tells him the truth and he decided to play along.

He plays the role of Gloria's dad until he is called away to Paris. Gloria is upset, but she notices that her mother will be in Paris too. She gets on the same train as Todd and travels with him to Paris, after he bails her out of trouble. Once in Paris she tries to see her mother, but her mother's manager won't allow it. A heartbroken Gloria returns to Todd's suite and he takes her to the movies. The movie is one of her mother's movies and Gloria runs out crying, and she asks him to send her back home. Gwen gets a call from school saying Gloria is in Paris with her father. Gwen freaks out because Gloria's father is dead. She ens up revealing at a press conference she has a fourteen year old daughter. Richard and Gloria show up during it and mother and daughter are reunited. 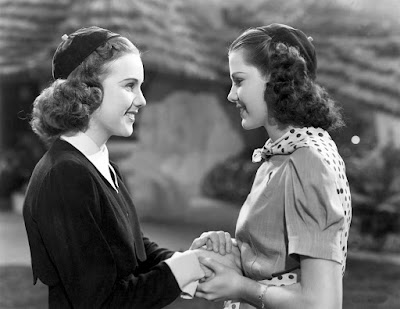 Deanna Durbin and Helen Parrish in Mad About Music (1938)

I really liked this movie. It was your typical Deanna Durbin movie plot, but I still thought it was cute. I really loved how fatherly Herbert Marshall was in this film, not only towards Gloria, but towards her schoolmate Felice. Herbert and Deanna would have tea every afternoon on set. They would talk about books and movies and I am sure other things as well. When I was watching this film the other day and Deanna would sing, my grandmother thought a phone was ringing. I had to correct her and tell her someone was singing, but she still thought it was a phone. One of her numbers made me tear up, when she sang Ave Maria, it made me think of my grandpa since they played that song at his funeral. I am going to say that this is my new favorite film of hers from the 1930's. You should check it out if you are a fan of Deanna and haven't seen it yet. You are in for a treat!
at February 24, 2019