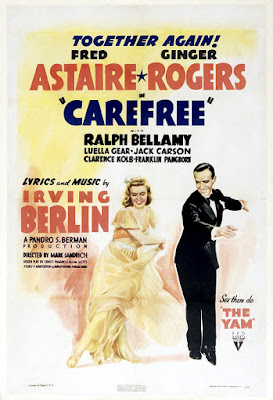 I can't believe I am already making a post for my second blogathon of 2019! The blogathon in question is The Made In 1938 Blogathon and it is hosted by In the good old days of Classic Hollywood and Pop Culture Reverie. In this post I will be talking about a movie I saw for the first time on FilmStruck, only last year. And after viewing this film for the first time, I asked myself "Why have I never seen this film before? It's amazing!" For some reason I have put off seeing Fred and Ginger's ten films for a god portion of my life. Don't ask me why, I love musicals and their movies are some of the most celebrated ones of all time! After that I went on a slight binge of their films but I still have a few more to see.

As I have mentioned before this film stars Fred Astaire and Ginger Rogers. Carefree was the eighth film this dynamic duo made together. Their co-stars in this film are Ralph Bellamy, Jack Carson, and Luella Gear. The director of this film was Mark Sandrich. He had worked with Fred and Ginger on four other films and this would be the fifth and final time he directed one of their films. The music and lyrics were provided by Irving Berlin. And as mentioned on the poster you get to see them do "The Yam" which is a very entertaining number, if you haven't seen it I am sure there are clips of it on YouTube. I suggest you check it out. 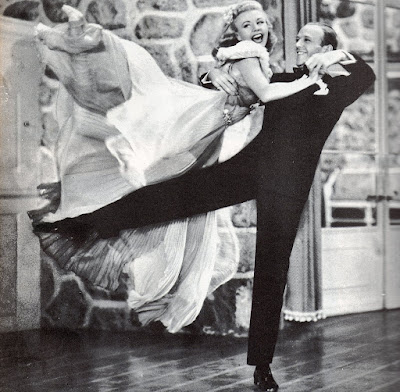 Fred Astaire and Ginger Rogers doing "The Yam" in Carefree (1938).

Dr. Tony Flagg (Astaire), a psychiatrist is paid a visit one day by his friend Stephen Arden (Bellamy). The visit is regarding Arden's girlfriend, Amanda Cooper (Rogers). She can't seem to make up her mind about Stephen's proposals of marriage, so he asks Tony to talk to her. Tony agrees to do this favor for his friend. Amanda come to see Tony and he probes her subconscious mind. Amanda returns home that night and dreams about her and Tony dancing. She is convinced she is in love with Tony, so the next time she sees him she makes up a crazy dream (to avoid telling him about her actual dream) and he thinks she is crazy.

He hypnotizes Amanda to act on her impulses. Stephen gets a call from Amanda's aunt telling her that she has to do a radio program. Stephen, not knowing Amanda is hypnotized wakes her up and rushes her out the door. Amanda begins to act oddly and she gets arrested for kicking an officer in the butt. The judge warns Tony that he will hold him responsible if Amanda does anything like that ever again.

That night Amanda, Tony, Stephen, Aunt Cora, and the judge all go out to dinner. Amanda admits to her Aunt (Gear) that she is in love with Tony. She asks Tony to dance with her and he tells her that Stephen should have the first dance with her. Amanda reminds Tony that the judge will hold him responsible for her actions before she throws a bagel at his head. The judge angrily threatens to lock up the person who did that for ninety days and Tony agrees to dance with Amanda. After they dance "The Yam", Amanda and Stephen go outside and she tries to tell him that she is in love with Tony but Stephen thinks she is saying that she loves him.

Stephen comes back and tells the whole table that he and Amanda are going to be married. Everyone is happy for them, except a confused Aunt Cora. Stephen asks Amanda to dance, but she asks if she can dance with Tony. He accepts and she tells him that she is in love with him. Tony and Amanda set up a meeting for the following day and she brings her Aunt Cora with her. Tony's assistant, Thomas Connors (Carson) ends up taking Aunt Cora down to her car so Tony and Amanda can talk privately. Tony calls Amanda out on lying about her dream and she admits it. He hypnotizes her again and this time he tries to get her to hate him. It works, but Tony realizes he is in love with her.

He follows her to the country club where Stephen and the judge are shooting birds. Amanda takes the judge's gun and points it at Tony saying "Men like him should be shot down like dogs." She causes a scene and fires the gun at Tony until he pulls her out of the trance. The judge demands Tony and Stephen be in his chambers tomorrow morning. Stephen tells Tony the next morning that he and Amanda are going to be married. Tony tries to tell him that he wants to hypnotize Amanda again. Stephen says no and asks the judge to file a restraining order against Tony. The judge grants the order. Later, that night Tony shows up at their engagement party and tries to hypnotize Amanda again while Connors distracts Stephen on the phone.

It doesn't work and the wedding is still on for the next day. Aunt Cora finds and advises Tony that if he wants to see Amanda he needs to climb in through the window (since Stephen has caught her every time she has opened the door) and she also tells him the wedding starts in five minutes. Thomas and Tony make a plan to knock Amanda out so Tony can get to her subconscious mind. They climb through the wrong window and Stephen isn't happy to see them. They escape his room and trap him inside. Tony comes into Amanda's room and she demands that he leaves. He tries to punch her, but he can't do it. Stephen comes in and tries to punch Tony, instead he hits Amanda and knocks her out. Tony gets to her subconscious and they make their way down the aisle. The judge is shocked, the bride has a black eye, and Tony marries Amanda. 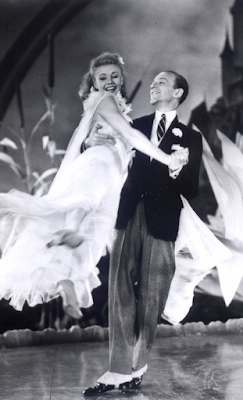 Fred Astarie and Ginger Rogers dance to "I Used To Be Color Blind" in Carefree (1938).

Like I have said before this is my favorite Astaire and Rogers film. Well, of the ones I have seen so far. I haven't seen all of them yet and one of my goals for 2019 is to see the rest of their films. This film had an interesting plot and of course I enjoyed the work of the cast. And while I like "The Yam," my favorite number is "I Used to be Color Blind." It is a romantic dream number that makes Amanda realize she loves Tony. And sometimes I just like to rewind that scene and watch it again. If you have never seen a Rogers and Astaire film, but would like to. I suggest you start out with this one. It is very entertaining and I think you would all enjoy it very much. 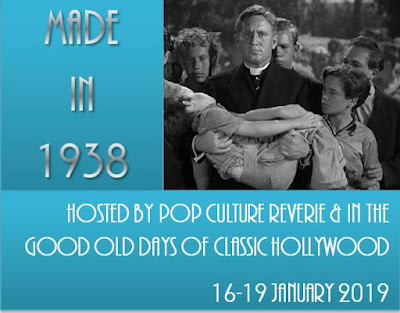 This post was written for The Made In 1938 blogathon. If you want to see the other posts please go here or here.