A Century of Carole Landis: It Happened In Flatbush (1942) 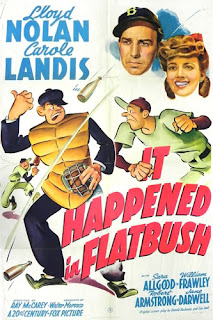 I know I was suppose to do a tribute post, but I had a hard time writing it. So, I am using my back up idea and I am gonna talk about It Happened In Flastbush. I can't believe yesterday would have marked Carole's 100th birthday. I feel like the luckiest girl alive being able to host this blogathon and I hope old and new fans of Carole enjoy it as much as I am. Anyway, let's talk about the film before I go "I love you guys" rant.

This film was released in 1942 from 20th Century Fox. It stars Carole Landis, Lloyd Nolan, and Sara Allgood. The story follows a former baseball player turned manager, Frankie Maguire (Nolan) who turns a team from Brooklyn into world series contenders. Carole plays Kathryn Baker who becomes the owner of the team after her Aunt passes away not long after signing  Maguire as the team's new manager. At first Kathryn has no interest in baseball or the team but as she starts to get Maguire better, things start to change. The team (who resent Maguire's training regiment) try to get him fired as their manager based on the fact he has fallen in love with Kathryn. Maguire ignores the petition they are sending around and leads the team to victory. 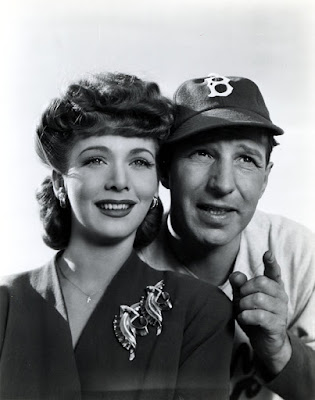 Carole Landis and Lloyd Nolan in a publicity still for It Happened In Flatbush. (1942)

Fun Fact: This is the first film that Carole made with Lloyd Nolan. Manila Calling (their second and final film) was released the same year as this one.

I first saw this film on TCM and after watching it I wanted to buy a copy of it. However, it hadn't been released on DVD yet, so I had to wait. I ended up getting it for Christmas a few years back because my dad remembered I wanted a copy. I really like this movie, it is in my top five films of Carole's. I don't know a thing about baseball, but even that part of the plot had captured my attention. Carole and Lloyd had great chemistry. She gave as good as she got when it came to their banter. So, if you are looking for a good sports movie with banter and a shot of romance give this one a shot. 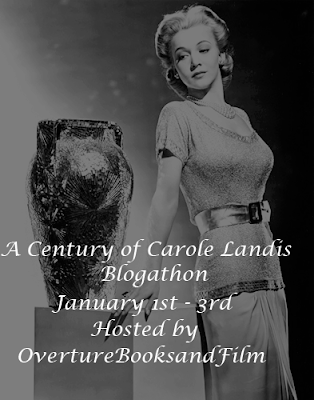 This post was written for A Century of Carole Landis which has been hosted by me! Go here to check out the other posts.

Email ThisBlogThis!Share to TwitterShare to FacebookShare to Pinterest
Labels: 1942, A Century of Carole Landis blogathon, Carole Landis, It happened in Flatbush, Lloyd Nolan