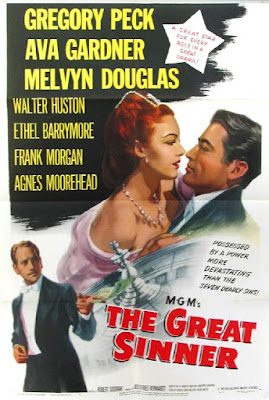 Ava Gardner would have turned 96 today. So, I will be celebrating her birthday by talking about one of my favorite films, The Great Sinner. This movie was released by MGM in 1949 and it co-stars Gregory Peck, Melvyn Douglas, and Ethel Barrymore. It is the first of three films that Ava and Peck would star in together. The other two movies are The Snows of Kilimanjaro (1952) and On The Beach (1959).

This movie starts out when Pauline Ostrovsky (Gardner) receives a manuscript from writer Fedya (Peck). The manuscript recounts their first meeting, on a train which was traveling from Moscow to Paris. After he meets Pauline, Fedya is attracted to her. She gets off the train before it reaches Paris and he decides to get off with her. He follows her to a casino and discovers she ahd her fater are gambling addicts. Fedya becomes interested in the effects of gambling and hangs around the casino to do a character study on gamblers. 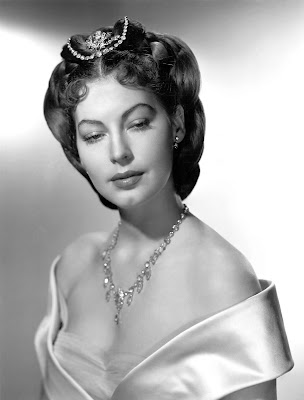 (A promo picture of Ava for The Great Sinner)

Fedya comes across one of these gamblers, named Aristide Pitard (Frank Morgan) after he tried to steal money from him. Fedya feels bad for the man and gives him money so he can leave for good. However, Pitard blows all that money at tables and ends up killing himself. But before he dies, he gives Fedya a pawn shop ticket which Fedya cashes in. It is a religious medal which once belonged to Pauline.

Fedya realizes he is falling in love with the woman he met on the train, but he finds out she is engaged to another man. She doesn't love the other man and is only engaged to him so he will pay off her father's gambling debts. This causes Fedya to start gambling himself. He starts out doing well, but ends up losing it all and becomes a gambling addict himself. It gets to the point where he has to borrow money from the man Pauline was suppose to marry. He ends up selling everything he owns and is completely broke. He has a vision of Pitard when he is at his lowest point. In the vision, the older man is handing him a gun to try and kill himself with.

He takes Pauline's medal again and tried to pawn it. The lady won't buy it and he attacks her before he loses consciousness. In the end, Pauline forgives him and he completes his manuscript. 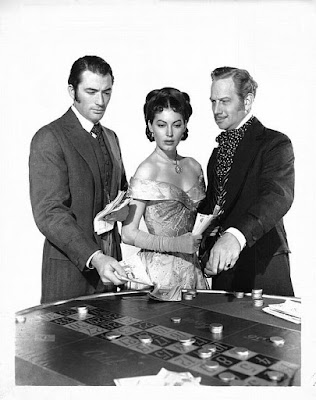 (Gregory Peck, Ava Gardner, and Melvyn Douglas in a promo pic for The Great Sinner)

Like I have said before, I love this movie. The cast is amazing and the plot is a good one. The chemistry between Gardner and Peck is on fire. I know they did three movies together, but I wish they did more. They had amazing on screen chemistry. I highly recommend this movie if you are looking for a great drama to watch over the Holiday break! 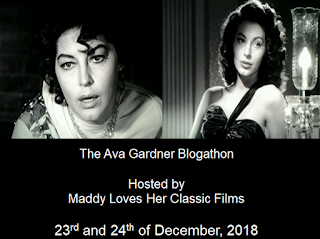 This post is for The Ava Gardner Blogathon. If you want to see the other posts go here.