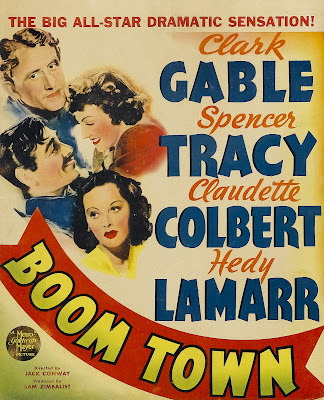 It is finally that time of November where I need to dust off my keyboard and write a post! And after the week I have had I am happy to be taking part in Bombshell: The Hedy Lamarr blogathon hosted by Musings of a Classic Film Addict. I will be talking about the 1940 adventure classic Boom Town which stars Clark Gable, Spencer Tracy, Claudette Colbet, and Hedy Lamarr, in that order. This is my favorite of her films because I haven't seen a lot of them I am ashamed to say. The other two I can think of off the top of my head being Come Live With Me and Ziegfeld Girl. I am hoping to add more of her films to mt "to be watched" list after FilmStruck gets taken from me. 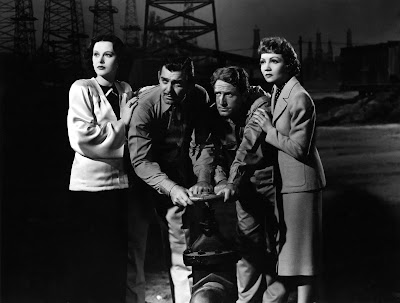 The movie follows "Big John" McMasters (Clark Gable) and "Square John" Sand (Spencer Tracy), two wildcatters who are down on their luck and team up to see if they can hit it big. They steal equipment from Luther Aldrich (Frank Morgan) and leave town before Aldrich and the sheriff can catch up to them. The first well they try is a bust, but the pay Aldrich back and convince him to back them and they finally strike it rich.

Elizabeth "Betsy" Bartlett comes along and falls in love with "Big John." "Sqaure John" thought that she was his girl, but gives her up because he wants to see her happy. But Betsy discovers "Big John" with another woman and she is heartbroken. "Square John" and "Big John" get into a fight about what happened with Betsy and they flip a coin to determine who gets to keep the oil field. "Square John" gets it and Betsy returns to "Big John" because he needs her after he nearly loses everything. 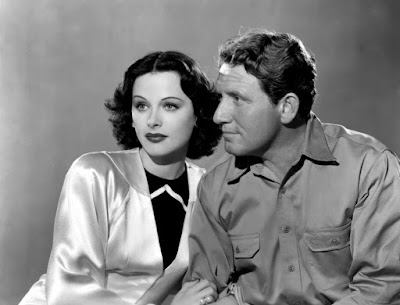 The birthday girl is not in this movie very long, but she makes an impact. She holds her own against Tracy, Gable, and Colbert in this film. There is a reason I picked this film and it is because of her scene with Spencer Tracy. It's the scene where he proposes to her and in my opinion, it's the best scene in the film. I am not a fan of Gable's character in this film, just like I am not a fan of his character in San Francisco. They are basically the same character is what I am trying to say, just switch out Colbert for Jeanette MacDonald. But you could basically say the same thing about Spencer Tracy's characters in both those movies as well. Like, I said before Hedy is not in this movie very long, but she is great in it. I would recommend this film if you enjoy a good adventure flick. There are issues with this film, but it is still a pretty good movie. And happy 104th birthday Hedy! 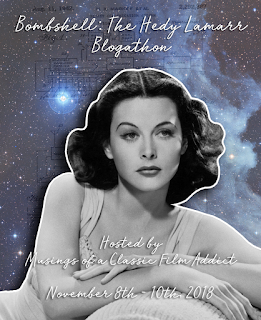 This post was written for the "Bombshell: The Hedy Lamarr Blogathon." If you want to read the other posts please go here.