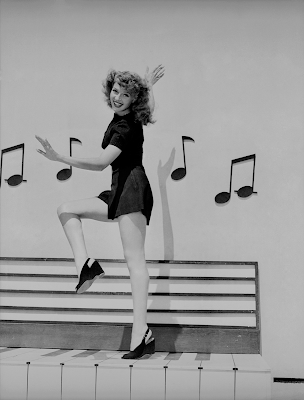 On October 17th, 2018, Rita Hayworth would have turned 100. This is why we are celebrating her career and her legacy with this blog-a-thon. The movie I have chosen to talk about is a technicolor musical called Cover Girl which came out in 1944 and co-stars Gene Kelly, Phil Slivers, and Leslie Brooks.

I was first introduced to this movie when I was ten years old and it would be the first movie I would ever see Rita Hayworth in. Gene Kelly had passed away the month before and I was heartbroken. I had wanted to meet him, but had never gotten the chance to and now I never would. So, my grandpa decided he would introduce me to more of Gene's films and this was the first on the list.

The first thing I remember thinking about Rita is that she was amazing dancer. Gene had said that she was a "real trouper" on set. The second thing I thought was that she was stunning. Her and Kelly made a handsome pairing on-screen and I wish they had been in more films together. Columbia had hoped to pair them up for Pal Joey, but MGM wouldn't loan Gene out. The role ended up going to Frank Sinatra.

The movie stars Hayworth as Rusty a chorus girl who works for Danny McGuire (Gene Kelly) character at his night club. One of the other chorus girls enters a contest to be on the cover of a  magazine. Her interview doesn't go so well, so she tries to sabotage Rusty's chances. However, the magazine's editor come by the night club and he is drawn to Rusty, mainly because Rusty looks exactly like her dead grandmother who he had fallen in love with a long time ago.

Danny doesn't want to stand in the way of her success and picks a fight with Rusty, so she will take a Broadway job she was offered. She ends up almost marrying the man who offered her the job, but realizes she loves Danny and goes back to him. The movie ends with Hayworth, Kelly, and Silvers singing and dancing their way to a happy ending.

Fun Fact:Gene Kelly's character in Xanadu was also named Danny McGuire, it would be his last film ever.

Overall, I love this movie. I think Rita shines in it and she has a great supporting cast to back her up. No one can deny her talent as a dancer after seeing this film or any of the films she did with Fred Astaire. I am also happy that Columbia filmed this in Technicolor. I don't want to live in a world where this film was made in black and white. If you are looking for a feel good musical with a great plot then you should give this movie a shot. 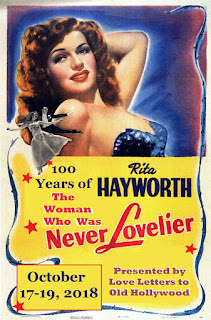 This blogathon was hosted by Michaela over at Love Letters to Old Hollywood. Check out all the other posts about Rita on her blog which you can find here.