The Fred Astaire and Ginger Rogers Blogathon: Week-end at the Waldrof (1945) 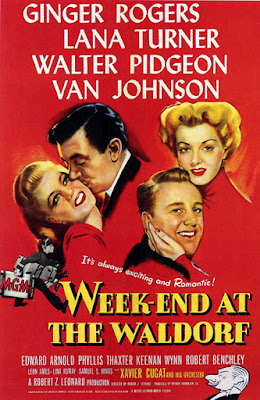 I discovered this little gem during Summer Under the Stars one year. I can tell you it was on in the middle of the night and that the star they were honoring that day was Ginger Rogers. I couldn't sleep, so I decided to turn on TCM. I was still in high school at the time, so I could survive on a few hours a sleep. Anyway, this is the first Ginger Rogers movie I ever saw and I fell in love with it. The movie was released in 1945 from MGM studios. The movie is based off of a book called Grand Hotel by Vicki Baum. The movie by the same name was released in 1932 and stars John Barrymore and Joan Crawford among others in that version.

Ginger stars in this film along with Walter Pidgeon, Lana Turner, and Van Johnson. Ginger plays Irene Malvern, a movie star who just wants to settle down and find lasting happiness. She is in town to promote a new film and attend a friend's wedding. She is upset that after the weekend is over she is going to board a train and go back to California to film her next movie. 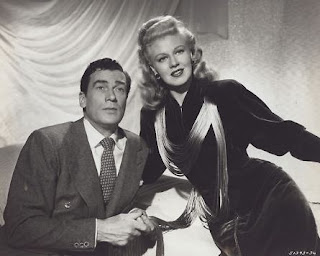 Chip Collier (Pidgeon) enters her life under unusual circumstances. He enters her room by accident and she thinks he is her maid's boyfriend who was coming to rob her that night. Her maid had forewarned her however, so Irene was prepared. The next morning, with Chip still sleeping on her couch, Irene goes through his stuff. She discovers his identification and confronts him. He says this little misunderstanding is all her fault. The woman who is marrying her friend comes to Irene's apartment to tell her the wedding is off. The bride to be thinks Irene is still in love with her groom, but Irene tells the young woman she and Chip are married.

The young woman returns to her own hotel room and tells her mother about Irene's secret marriage. Of course word gets out and there are even stories in the newspapers about it. Chip goes to the wedding with Irene, but he doesn't go to the premiere of her film with her. Instead he lets himself into her hotel room and presents books to her that state they are in a common law marriage. However, the next day Irene's manager gets Chip to sign a statement saying "they were never married." This is Irene realizes that she loves him and they end up making up.

The last scene of the film is of Irene waving to Chip as he flys away. He is leaving to go continue his correspondence of the war. He is shown in the airplane lighting a cigarette with Irene's monogrammed lighter. 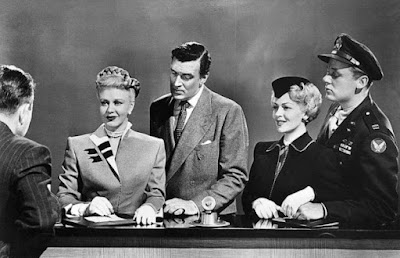 This was the first film Ginger ever made for MGM, which at the time was a power house. She found Walter to be "delightful and easy going." She was also upset that she had no scenes with Lana Turner and only had one scene with Van Johnson. They don't say anything to one another, they just pass each other on the stairs. I know I didn't talk about Lana and Van in this movie, but I wanted to focus on Ginger. Lana and Van's story line is my favorite in the movie. But I love the banter between Irene and Chip. I love a story with a happy ending and everyone got one in this little gem of a film. 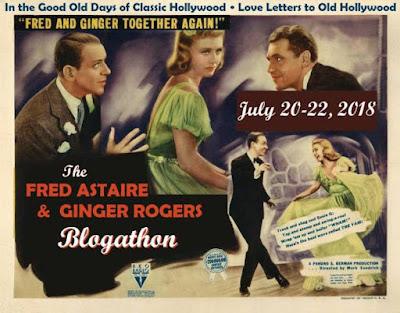 This blog post was written for The Fred Astarie and Ginger Rogers Blogathon. To see the other posts you can go here or here to check them out.