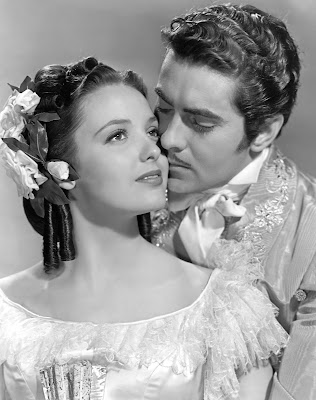 Tyrone Power had many screen partners in his movie career. Loretta Young and Alice Faye are a couple of the actresses who were on screen with him more than once. Another one of those actresses was Linda Darnell. Linda was a teenager when she starred opposite in him in four films between the years of 1939 and 1941. They had an easy- going chemistry and romantic moments looked effortless. That's probably because Linda had a crush on him as evidenced by the poster she had on her bedroom wall before she met him. 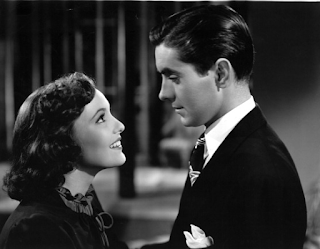 Their first film together was Day-Time Wife which came out in 1939. The story is about Jane Norton (Darnell) thinking her husband is fooling around with his secretary goes off to get a job of her own. Tyrone plays her husband Ken Norton. And the supporting cast includes Warren William, Wendy Barrie, and Binnie Barnes who plays Jane's best friend, Blanche. She is a great character and I love her. The movie is an hour and ten minutes long.

Now, I will say this before I get to the point I want to make about Linda Darnell. She holds her own against the other actors in this film. But I knew going into this film that she was fifteen or sixteen years old when she made this film. And there are some scenes where that shows. Nevertheless, they still clicked on screen and it shows throughout this movie. Tyrone would even mess up his lines to take the heat off her.

And this film serves it's purpose in my opinion. It is a romantic comedy and I love it. Leonard Maltin gave the movie a two star review on the TCM website. He said that Power and Darnell were "an engaging couple even in lightweight fare such as this." He also gave a two star review to their next outing as an on-screen duo.

The next movie they starred in together was Brigham Young which came out in 1940. The story follows the Mormon people's struggle to survive their journey out west. Tyrone Power plays Jonathan Kent and Linda plays Zina Webb. The film also stars Mary Astor, Vincent Price, and Dean Jagger as Brigham Young. The run time fr this movie is and hour and fifty-two minutes.

I normally don't say this about older films, but sadly in this case I have to. I thought this movie was boring. The only times I found this movie engaging was when Linda and Tyrone were on screen. All the other actors were fine in their roles. But I just couldn't stay focused on this movie. And it hurts me to say that, it really does. And yes, I recently bought and re-watched this movie for the purpose of this blog post. The last time I saw it was on TCM and that was ten years ago.

Maltin would give this film a two star review and say that romance between Darnell and Power's characters was "tepid" I have to agree with him here. I find them to be the least engaging here as an on-screen couple. There are sweet moments here and there. But this movie is my least favorite out of the four. But I don't plan on getting rid of my copy of it. I hope my opinion might change one day. 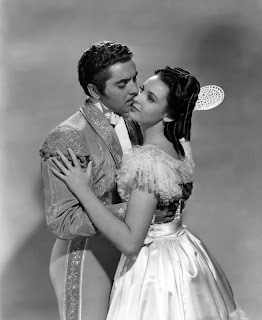 We go from my least favorite to my absolute favorite movie starring these two. The Mark of Zorro also came out in 1940. This movie is a remake of the 1920 version which also had the same name. That version starred Douglas Fairbanks. The supporting cast includes Basil Rathbone, Eugene Pallette, and Robert Lowery. The run time of this film is an hour and thirty three minutes.

As I have mentioned before, I really like this film. I even have the film's poster hanging on my bedroom wall. In this film Tyrone Power plays Diego Vega and Linda plays Lolita Quintero. Diego becomes the masked outlaw, Zorro during the night time to fight against the mayor. Linda and Tyrone are both amazing in this movie. I love the scenes they share together. The scene where Zorro and Lolita spend time in the chapel together is my favorite scene.

Out of all the films Leonard Maltin gives this one the highest rating with three and a half out of four stars. Honestly, if you are interested in viewing a Power an Darnell film I would highly recommend this one. It has all you need in it romance, adventure, and awesome sword fights. 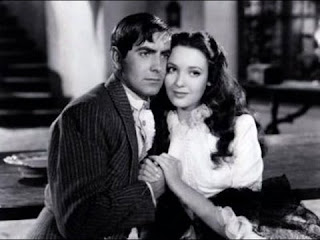 The last film these two ever starred in together was Blood and Sand and it came out in 1941. Rita Hayworth, Anthony Quinn, and Larid Cregar co-star in this film about a married bull fighter who has an affair with a wealthy socialite. Tyrone Power plays the bull fighter an Linda plays his wife. This movie is in color and the run time is two hours and five minutes. Which makes this the longest movie they starred in together out of the four.

I need to mention Carole Landis here for a moment. And I promise I won't shoe horn Carole into every post I make. But Carole was originally suppose to play Rita Hayworth's character. The studio claimed Carole wouldn't dye her hair red, but the truth was Carole wouldn't sleep with the studio boss anymore so he kicked her off the project. They ended up borrowing Rita Hayworth from Columbia for this film. And she does an amazing job in the role she was given. But I would have still loved to see Carole in that role.

I feel like everything I want to say about this movie would spoil it for people who haven't seen it. I have mentioned the affair between Power and Hayworth's characters. But in the end Linda's character is with him when he needs someone the most. Honestly, it's my favorite scene in the whole film and it's a good last scene for them to have together. Leonard Maltin gave this movie a three out of four stars and I think that is the perfect rating for this movie. 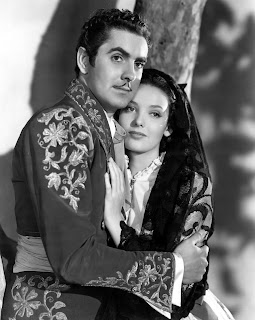 They would both continue acting after Blood and Sand. But both of their careers would hit the skids in the early 1950's. They were bot let go from Fox around this time, but Tyrone would return to Fox in the last year of his life to do some work for them. Tyrone Power died in 1958 at the age of forty-four. He was in Spain making Soloman and Sheba when he had a heart attack. He was one of the first actors from Hollywood's Golden Age to die young. He left behind a pregnant wife and two daughters at the time of his passing. His third wife would give birth to their son in early 1959. He is buried at Hollywood Forever alongside other stars like Marion Davies, Peter Lorre, and Helen Parrish.

Linda Darnell would marry three times and she and her first husband ended up adopting a daughter. She, like Tyrone Power would also die young. Linda Darnell died at the age of forty-one from burns she suffered in a house fire. She was cremated and she had wanted her ashes to be scattered on a ranch in New Mexico. But a dispute with the owners of the ranch caused that to never happen. Instead her daughter had her ashes buried at Union Hill Cemetery in Chester County, Pennsylvania. 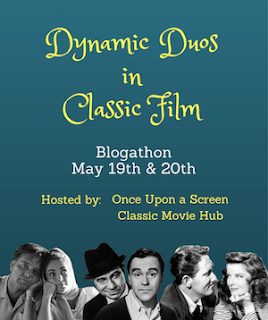 This blog post was written for Dynamic Duos in Classic Film blog-a-thon. Go here to view the other duos featured in this blog-a-thon.